Whilst your computer might be great for spreadsheets and emails, it’s not at all that good at processing sound. That’s why our engineers designed our award winning DacMagic XS to instantly upgrade the sound output from your laptop. Just plug it into the USB connection of your computer or Mac for incredible, detailed high resolution audio.

DacMagic XS delivers up to 10 times more power than most laptop soundcards. The headphone output from most laptops only outputs about 15-20mW, meaning weak bass and a lack of depth. The DacMagic XS however can output a massive 105mW for proper depth and volume that will drive the very best headphone set ups hard, with detailed sound and amazing bass. The volume available is easily adjusted on the simple fingertip controls and an LED shows the sample rate, so you always know you’re getting the right level of clarity and detail from your tracks.

We know you won’t want to be without it, so we machined the DacMagic XS’s lightweight but hardwearing chassis from aluminium, for a total weight of just 100g.

The DacMagic XS is available in 5 stunning nishes, Titanium, Red, Gold, Blue and all Black. Take your pick.

When running in USB Class 2 mode, the DacMagic XS can also use our dedicated Windows USB Class 2 USB driver (driver not required for Apple computers). This allows you to bypass the computer operating system’s poor audio path, preventing unwanted interference. You don’t need to put up with bad sound from a laptop, ever again.

"It's a great choice for someone who wants to enjoy higher-quality music on the go."

"A highly recommended piece of technology for anyone that is listening to a lot of music on their computer. For its output, size and price it truly is one of the best buys in the after market DAC marketplace."

'If you really want to hear your headphones, in-ears or external speakers as they were meant to be heard, get yourself one of these pocket-sized DAC converters from renowned sound specialists Cambridge Audio.'

"Boy does it deliver on the sonic front. It creates a huge, detailed soundstage that's full of warmth."

"The DacMagic XS delivers a lot of functionality and sonic goodness for under $200. For audiophiles looking for a road warrior that will also be at home hooked up to any computer, portable, or desktop, and will successfully drive most headphones, the Cambridge Audio DacMagic XS DAC is a very affordable option."

"If you thought the pricey cans you treated yourself to sounded good before, just wait until you jack them into the XS and hear what digital music is supposed to sound like."

"This matchbox-sized gadget is a boon for audiophiles who prefer to lose themselves in music during long haul flights."

"I'm using my DacMagicXS every day with my Macbook Air and headphones. It's a very nice sound, and I'm  enjoying my music more now. I hope many Japanese Audiophiles get to know Cambridge Audio's sound."

"For the quality it brings to music it will be worth it."

"The Cambridge delivers plenty of insight and has an appealingly delicate way with vocals – there’s natural warmth here and a nice full-bodied balance.“

"Given how masterfully it handles hi-res sources in particular and its sterling work with lower-quality material, it isn't hard to say that this is probably the best entry-level DAC around."

"This little device is able to get a little closer to the experience of listening to music in a recording studio."

"The DacMagic XS is a great way of easily upgrading laptop audio. It's built-in headphone amp with handy volume controls make it ideal if you need top-notch sound on the move."

"The Cambridge Audio DacMagic XS adds depth and detail to your digital files that you didn't know existed.“

"The DacMagic XS has an upfront, engaging and punchy sound, but this never descends into hardness or sounds unpleasant. It is a dramatic improvement over the internal sound systems of an Apple Macbook Pro for example"

Best DAC under £100
"The best USB DAC if you're on a super tight budget, the DacMagic XS is truly portable, requiring no external battery, and connections are simple with just a USB input and 3.5mm output."

"If you’re looking for a USB DAC that will improve computer audio—but not break the bank—Cambridge Audio’s DacMagic XS is a leading contender."

"Kramer searches for flaws but finds little to fault in Cambridge Audio’s new DAC that also happens to be a headphone amp, and for a small cost will resurrect the ‘hi’ in fi coming out of your PC or Mac.“

Whats in the box

Why isn't my DacMagic XS producing any audio? How can I use the DacMagic XS? USB Audio support page
Show less...

There is no custom installation information available for the DacMagic XS.
Show less...
Register Your Product 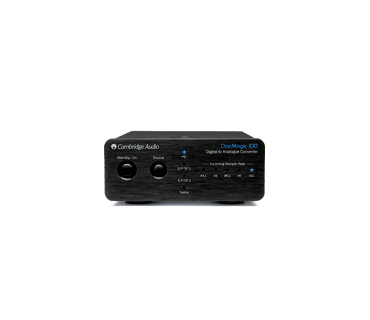