Champion beatboxer. Musician. Comedian. There’s no denying that Beardyman aka Darren Foreman is a very talented chap. We sat down with him to talk about his latest project ‘The Dream Team’.

For anyone reading this that might not be familiar with what you do, can you give us a little background?

I am the ghost of Prince. My name is Beardyman. I am a musician and human. I make music and fecal output. I’m at peace with who I am and with the imminent destruction of all civilisation.

But more on point, I like to improvise in my sets and form bands consisting of people that have the same obsession with freestyle. There’s just something about it that seems kind of elemental. There’s something very raw about the idea of improvising.

How did you get started out in music and how has it lead you to where you are now?

I started out as a beatboxer and quickly developed ambitions beyond it. I’ve always played instruments and made music and used beatbox as a means to make music on the fly. So what I tend to do live is varied depending on where I am, sometimes it’s very electronic sometimes it’s more hip-hop. It can be whatever. There’s a show I’m doing up at the Edinburgh Fringe this year and it’s the last time I’m doing it, it’s called One Album Per Hour. It’s kind of a comedy show where I make songs in real time. I’m now venturing into this new area where I’m taking it into band territory. 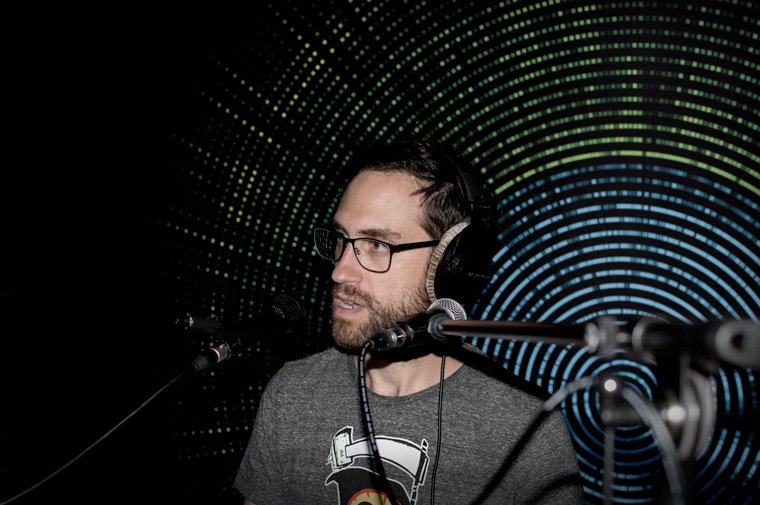 Who really inspired you to take the direction of including the band and getting into more improvised routines?

I don’t really know. I think it’s just a primal urge to do it and see what you can get out of improvisation. I think Who’s Line Is It Anyway really, because it wasn’t necessarily musical and the music stuff they did do was never great, but it was really interesting. You had a geezer at the piano or the occasional hoe down. It was the fact that they could do it that I found really interesting.

There’s something about a written rap that it can be as on point as you like, where conscious thoughts gone into it but do they mean it now as much as when they wrote it? I mean you can’t just diss all of recorded music but there is that nagging suspicion when you see someone perform live, to what degree is this an act? There’s something really interesting about the idea that what you’re witnessing being created is literally the absolute distilled essence of what it is they’re trying to say. It must be because it’s directly flowing from them.

Kind of what you get with previously unreleased demos?

Yeah if you’re a music obsessive and love a particular band, you want to hear the earlier outtakes and first demos of a song you love, it’ll always be rawer and not as polished. Maybe you’ll prefer the final recording, but there’s something about that raw version. It’s about bottling that. When making a good record you try to bottle that rawness to a degree and get that original feeling. When recording, the more takes you do, the further you get from the original feeling you had and the more you get into a pattern and go into muscle memory mode.

When flying by the seat of your pants you get this focus, it’s a really fun and unique kind of buzz. It’s not always enjoyable at the time because sometimes you know what you want to do but you can’t quite get there. You have these moments when you’re loving it and somewhere you’re not quite feeling it but the audience can’t tell, they just see you concentrating but in your head you’re like “What the fuck is happening? Was that right? What’s next? I’ve got an idea but can I use it?”. It’s more like a sport in a way, there’s a real thrill to it. 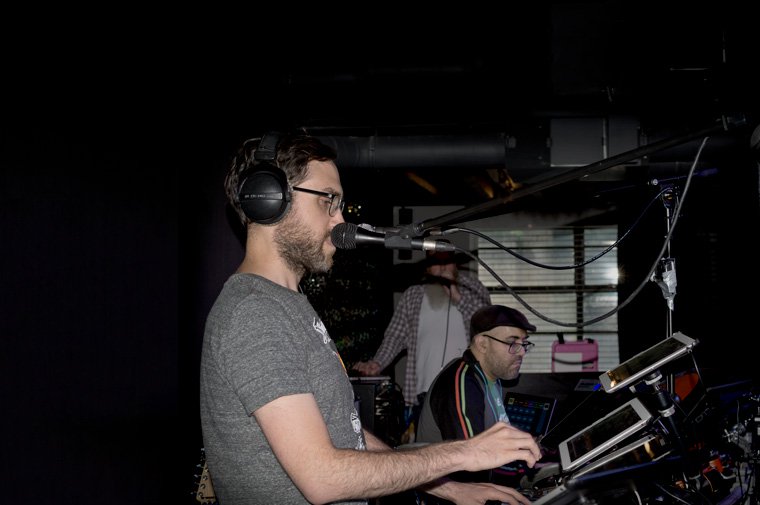 So how have you progressed from a beatboxer to what you’re doing today?

When I first started I used to improvise entirely, I wouldn’t have a set list. I’d rock up with a mic and a loop pedal and I’d just talk shit and turn it into a loop and then start doing stuff with it. It’s a bit like what Reggie Watts does, I started doing stuff like that. When I saw him I was like “Oh there’s another one”. I moved on from that to do more raw music and see how far I can push it.

There’s also a guy called Tim Exile who makes these incredible, unique plugins that mangle sound in all sorts of ways. He makes these things for himself in Reaktor to use and then sells them. I saw him play when I had a couple of shit loop pedals which I was quite happy with at the time, but when I saw him play I thought “I’ve really not been trying” and realised I needed to think about how to do this, what I wanted to do and try and make the music that was actually in my head and see how far I could get. If it wasn’t for him, I don’t think I’d be doing any of this.

Your New Project is The Dream Team.

That is its current title.

No it’s a bad name. But I’ve called it that now, I called it that by accident. I did a night called The Dream Team Sessions where I gathered lots of people I wanted to collaborate with or had in the past and played over two nights at The Jazz Café which was really cool. One of them was really out there, with one of the guys from Captain Beefheart & his Magic Band, the drummer from The Bays and a bassist called Steve Lawson who makes loads of crazy clouds of melodic insouciance. It was like a mad wall of noise that I couldn’t really control but people really liked it. The next night I did a night that was more lyrically based and it was fucking incredible. I was so astonished at how well it worked I thought I needed to do this again. So we did a big gig at Brixton Electric in April that went very well. We made an album from it as it was all original material made from the night from audience suggestion. So this band is a continuation of that concept using many of those people but with a rolling line up. We’re going to see how far we can push the idea of you don’t need to write your material in advance of the show. You’ve got to prepare and train and configure but in terms of writing material we’re going to try and keep it to real time.

So how do you rehearse if the shows rely on you bouncing off the audience?

You can’t rehearse but you can train and go through drills and practice, which is what I probably should be doing now! You have to get to know the musicians and then find out what you can’t do. So I’m sort of MD-ing the band. Today what we’re practicing is dance music form. So builds, drops, breakdowns which is all easy enough but it takes practice. You also have to be comfortable with different troupes and genres and makes sure you’re with extremely skilled musicians who know when to play, what to play and most importantly when not to play.

Since you’ve been doing this have you had bizarre or memorable suggestions for songs from the audience?

We’ve had some that we’ve refused, we take them out of a bucket at the front of the stage. There was one I didn’t even get to which I only found in the bucket after the show which was “I think one of my dads is gay” which is quite funny. There was another that was “Pumpkin bonanza” or something. You can make something out of anything it just depends on what you’re feeling at the time. If you’ve just done a really deep song then you might want something uplifting after. We keep it at the pace of a show, you don’t want there to be too much space. Sometimes I’ll say “Let’s have something upbeat” or “That was silly, let’s get a serious song now”. That helps us craft the experience. It also helps craft the album being made, there’s a lot to consider. Doing things appropriate for different genres and fusing genres together, which sometimes doesn’t work. When I’m doing these comedy shows I’ll try and go out there and more readily take a suggestion because it’s funny but this show isn’t a comedy show. It has to be good.

YouTube effects everything. Even Twitter, Facebook, Instagram, all these things are windows in which we see the world. The TV speaks only to the older generation now, younger people don’t trust or watch it. For me the music industry was doing its best when it was crumbling, when you had MySpace as the primary means in which people discovered new music. It’s all subjective but YouTube is a much purer way to discover new music. It’s really hard to monetise listening to music these days. But it’s easier now than a few years ago as it’s mostly legal apart from YouTube. With YouTube if you want to be militant about it you can search for your video and get it taken down. However Monty Python put a bunch of their sketches on there and then released a DVD of all their stuff and sold thousands of DVDs off the back of that. It can be the same for the music industry too.

I think Apple Music is quite good, it feels like it’s curated with a bit more care. I still think the best way to discover new music is recommendations from friends, blogs, things like that. Who knows, music publishing, rights management and remuneration from your recordings is all weird because it’s based on a time when you had physical copies.  When records were new there were new laws that were business laws around product and owning the master copy. So now these terms like publishing and masters which are still used on a legal basis for remuneration literally have no analog in the real world. To learn it you have to have a bit of a history lesson to find out where it all came from.

You’ve been rehearsing in our new Melomania space, how have you found using it?

We’re really touched that you guys have let us use it. Sound-wise it’s fucking great. It’s really cool, I can’t wait to see where it goes and what’s going to happen in here. The fact that you have a disco ball means good things are going to happen!

Intrigued by Beardyman and The Dream Team? Head to the website here, then check out the video below of ‘Day By Day’ recorded in our venue space Melomania. You can download the full 'Day By Day' E.P from Bandcamp here.