Glasgow indie legends Belle and Sebastian are celebrating 20 years in the business this year, so we chatted with keyboardist and founding member Chris Geddes to see what’s changed over the bands career and what the future may hold for the Scottish outfit.

Belle and Sebastian have been a band for 20 years. What are the secrets to the bands longevity?

We still have a good laugh together. Musically we’ve gone off on a few tangents, and not got too stuck on doing the same kind of thing, for better or worse.

Technology wise, a lot has changed between your first album ‘Tigermillk’ and your latest ‘Girls in Peacetime Want to Dance’. What changes in music production over that time have had the most impact on yourselves and the industry? Do you think what’s changed is for the better?

In terms of ourselves then, technology has probably had the biggest impact on the live show. The first album had a track like Electronic Renaissance on it, but we couldn’t have reproduced it live without taking a bunch of analogue synths out on the road. With the set up we use now where we’re using a laptop running Ableton live with four different midi controllers on stage we’re able to play songs like The Party Line from the new album in a way that’s pretty close to the sound of record, and then switch straight into a more traditional acoustic number like Piazza, New York Catcher. Much as I sometimes miss the simplicity of touring with just a Hammond and Wurlitzer the way we do it now gives us more scope for variety.

In the studio things that used to be difficult are now easy, in terms of combining programmed elements with live performance and that sort of thing. And of course more generally now anyone with a laptop can make a tune if they’ve got an idea. A lot of really interesting music gets made that way, but I think there’s also something being lost in the fact that so many great studios are closing, and so few records now are made by a group of musicians playing together in a room. There’s no equivalent to the wrecking crew or Motown musicians who played on all those ‘60s hits. 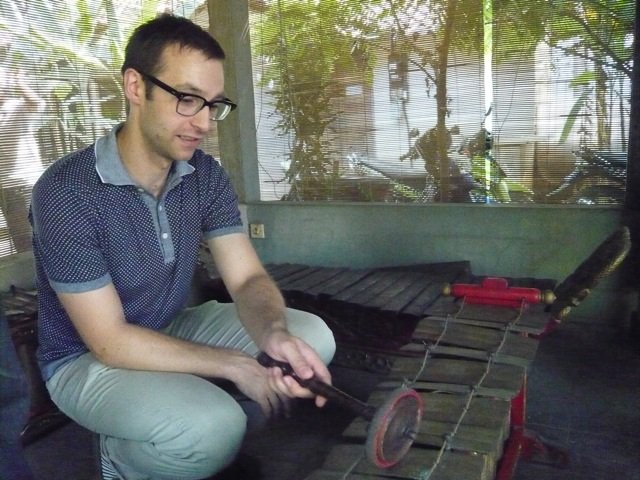 "The shows that we did play around 1997 and ‘98 sometimes had an exciting chaotic energy."

We’ve talked about the change in music production, what about the changes in touring and the live music scene? What do you think has had the most impact on the band and how have your live shows evolved over time?

We started out mainly as a recording band, and didn’t do a lot of gigging in our first few years. The shows that we did play around 1997 and ‘98 sometimes had an exciting chaotic energy but they were also pretty sloppy, songs could easily fall apart. Since 2001 we’ve played live a lot more, and gradually got better at it. We’ve been lucky to have a lot of the same crew with us for that whole time. The show changed quite naturally I think as we went from playing small places to bigger theatres and festivals. We were lucky to start at a time when our first few records could do the work for us, through getting played on the radio here and in the states. I don’t think that would happen now. A band like us starting today would have to tour all the time to build an audience. I think very few new bands today manage to make it to the sort of mid-level that we’re at. Things either stay super-underground, or get really big.

Has the process for songwriting changed over the years too? Is it harder to stay creative now?

In terms of how the writers come up with the initial ideas I’m not sure. In how the band work on a new song when someone brings it in, it’s not changed that much. The sounds might be different, depending on the song, but we’re usually still all in the same room playing. The writers might bring things to the band a little less complete than they used to, to see where everyone else’s input takes something but in other cases things can be pretty fully realised from the off and the first time we play something through in the practice room is close to what goes on the record.

Are there any listening habits or band traditions that have stuck around since the early days?

Ever since Bob joined the band in 2001 he’s pretty much had control of the stereo in the dressing room, and he’ll usually get a good party going after the show. Plenty of northern soul, The Stones, Chic, Beyonce etc.

20 years of being a band obviously means 20 years’ worth of songs, how do you handle the mammoth task of putting together a set list?

Stuart writes a unique setlist for each show we do, it’s something he puts a lot of thought into, taking account of the venue, the night of the week and the prevailing wind. But on any given tour the overall shape of the set in terms of the energy level at different points tends to stay roughly the same, and there’ll always be songs that we’re playing a lot and so are better at, and then other things that come in and out.

Can we expect to see another 20 years of Belle & Sebastian? What do you think is in store for the band in the near future?

We’ve started recording a few new tunes lately, but I don’t think anyone’s planning twenty years into the future. Well, I suppose the parents in the band are. They’re probably thinking “in twenty years I might get a bit of rest”. I’m sure if you’d asked a lot of the ‘60s bands who made it to the ‘80s if they’d do another 20 years a lot would have said “no”, but then they did anyway. A lot of the time you don’t know what else to do other than carry on.

What advice would you go back and give to a much younger Belle & Sebastian?

I’d tell myself to practice a lot more. Maybe buy more studio gear instead of records. Or as well.

As these shows at the London Royal Albert Hall are in celebration of your 20th birthday, do you have anything special lined up for the night you can tell us about?

We’ll be playing all the songs off ‘Tigermilk’ one night, and ‘If You’re Feeling Sinister’ the other. After that going for a bit of a wander through the catalogue.

What are your thoughts around the way in which many people listen to music these days; Streaming services, compressed MP3s, hi – res music etc…

Music is so ubiquitous these days, you hear it all the time when you’re out in the town and so on. You can almost forget to just sit and listen sometimes to something you really enjoy. Especially if you’re playing music off the computer, which makes it hard not to be doing something else at the same time, like writing this interview.

But right now through the joy of streaming I’m listening to this radio show that my friends Anh and Eli did on dublab radio in LA, of contemporary classical music, and it’s absolutely amazing. (Click here to check it out!) There’s a Steve Reich piece in it for flute that I’d not heard before, that’s wonderful.

The 20th anniversary celebrations kick off on the 22nd and 23rd of June at the London Royal Albert Hall. For all things Belle and Sebastian, make sure you head on over to their website.